‘Game Over’ – Interview with the play’s author, David Bain

Standard by WellPool October 23, 2018 No Comments 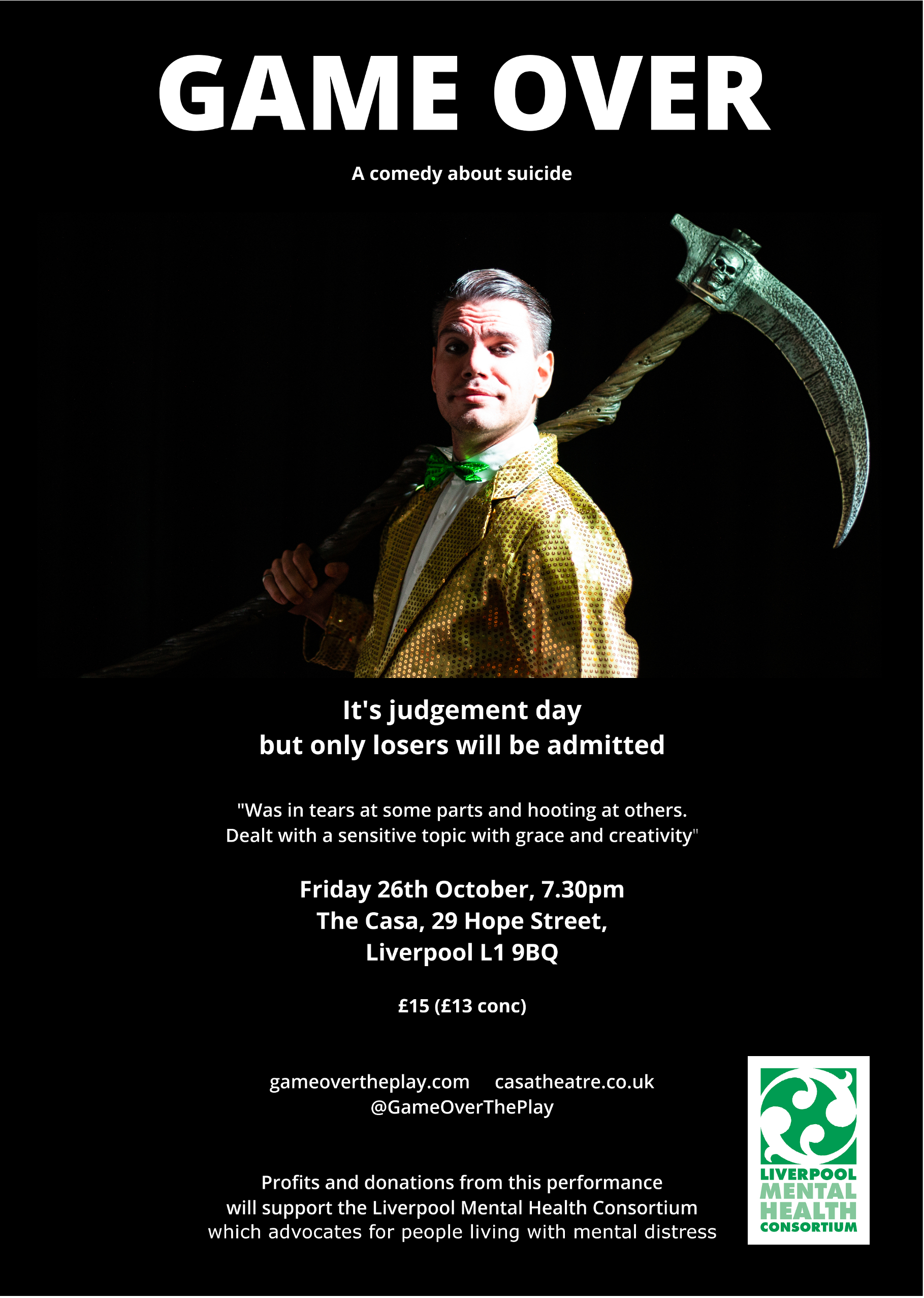 ‘Game Over’ is a comedy musical that tackles the subject of suicide. With the play being performed at The Casa, Hope Street, Liverpool on this coming Friday – 26th October, we are very grateful to the play’s author and director, David Bain, for taking the time to answer a few questions for us.

GAME OVER is Dave Bain’s third play.  Prior to GAME OVER he has performed as one half of the double act, Bain & Able with his wife, Zeina.  They have done two plays together in London (both at the Cockpit Theatre) and also performed in London stand-up clubs.

For the last nine years he has worked as a volunteer befriender and assistant coordinator at the Maytree Respite Centre. He is also training to be a psychotherapist, and is building a private practice in London.

Thanks, David for taking the time in this busy week to talk to Wellpool.

MF: If I could start by asking what made you decide – inspired you, if you like – to write about suicide?

DB: For the last nine years I’ve been working with suicidal people at a place called the Maytree. It’s a respite centre for people in suicidal crisis.  People come and stay with us for five days, where they receive twenty four hour support.  I find the work very rewarding.  On the one hand you see people at their lowest, but there’s also a vulnerability that comes from being so stripped down emotionally.

MF: …and having decided on the theme, how easy was it to write comedy and songs about the subject?

DB: The male suicide rate is four times that of women, so I was interested in exploring that.  It’s a bit of a generalisation, but men sometimes hide their feelings by making jokes.

At the start of the play our two male leads will do anything but talk about their own experiences.  But they have already taken their own lives – so there’s a disconnect which is both jarring and a bit ridiculous.  So you’ve got the characters using comedy to avoid engaging emotionally with themselves.

On the music side, I’m a song writer and musician and I’ve been wanting to write a musical for quite a while.  Thankfully, Death (in the show) is all powerful, and it turned out that he really liked musicals too.  So in the play he is constantly forcing the other characters to sing – much to their chagrin.  There’s a lot of different musical styles in the show.  For example, we have a couple of “this is a musical” numbers, a folk song and a Kinks style song.

MF: And of course, bringing the game show into it – how did that idea come about?

DB: The shows I enjoy the most are site specific pieces where the audience can become part of the action.  The great thing about doing a game show is that it completely fits the medium – it takes place in a performance space with an audience.  It also gives a structure to the play; the progression of game show rounds gives a constant forward momentum to the narrative.

MF: what have been some of the difficulties in getting the play from page to stage?

DB: Finding the right actors is sometimes difficult.  I’m very lucky with the current cast;  they’re all super talented and quick, and we’ve bonded well as a group.  To be honest, the hardest part is always selling tickets.  You can have five star reviews or nice tweets from previous audiences, but ultimately people only tend to come by word of mouth.  When you’re doing a one off performance (as we are in Liverpool), people have to trust the publicity more – and I appreciate that’s not an easy thing to do.

MF: ..and of course seeing it come together will have been a real high – what has been the best part of the process for you?

The first week of rehearsal was quite a high for me. I’d been living with the script in my head for about four years, so to finally see it performed was magical.  It was also great to see actors bringing their own creativity to the material.

MF: Do you have a ‘next project’ in mind or even in process?

DB: In my day job I work as a psychotherapist.  So my next show is about trauma and recovery.  And, of course, it’s another site-specific musical.  At this stage, the script and songs are about 50% done, so we’ll definitely be moving into production next year.  It’s an all female cast, so I’m challenging myself in terms of trying to write well rounded female characters.  In a way it’s also a companion piece to GAME OVER, which was about how men process depression.  The next one will have a more female perspective.

Thank you so much, again, David Bain. We’re really looking forward to seeing the play on Friday!