Warning: Creating default object from empty value in /homepages/14/d180315091/htdocs/app559980455/wp-content/plugins/nimble-portfolio/admin/redux-framework/inc/class.redux_filesystem.php on line 29
 Drawing Down The Goddess With Earth Moves - Well Pool

Drawing Down The Goddess With Earth Moves

Standard by WellPoolReporter July 15, 2018 No Comments

I recently had the pleasure of attending an event put on by Earth Moves at the Walker Art Gallery and Liverpool World Museum. It was called Drawing Down The Goddess and it was an interesting exploration of mythological goddess culture, discovering our own personal connection by the medium of drawing and finding out about the strong connection the goddess has to the Arts in Liverpool.

As a Liverpudlian and often found in the city centre I’ve actually been rather ignorant of the great presence of the goddess. I believe I’m not alone here.  It’s not usually given a second thought but many of the artists, designers and architects who built the city in the 19th century took their inspiration from a variety of goddesses and used their images to help visualise an idea, concept or thought. Thus a successful and beautiful merging of cult and culture has created a magnificent visual effect against which the story of the growth of Liverpool as a port and city is told.

Before we set out  on our voyage of discovery we were directed to sit in the sunshine outside the Art Gallery and hold our faces to the sun with our eyes closed. It felt good to feel and absorb its warmth and rays and to take a moment to gather our thoughts together,  this mini meditation prepared us for the journey of learning that lay ahead.

We began by looking at the Justice Frieze outside the city’s St George’s Hall. I have to admit, with some shame, that I have never before noticed this fabulous set of sculpted panels. The concept of Justice is depicted as a female and each panel tells the story of the growth and development of this ideal. As we stood on the plateau outside the hall we were able to observe the statue of the Spirit of Liverpool that sits atop of the Walker Art Gallery. This sculpture shows Liverpool as a woman like a queen or goddess and she is surrounded by many symbols connected to Liverpool. 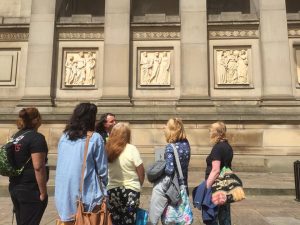 Once back inside we heard about a number of goddesses and the history and spirituality of each of them. Goddesses discussed were Isis, Sekhmet, Our Lady and even the dark goddess. We were led in a short meditation and reflected on the drawing aspect of the event. As none of us is very arty we had been slightly worried about this part of the event. However we need not have been concerned as it was more about our own personal connection to the goddess;  it was to be our own interpretation rather than a photograph. We were to use Picasso as our inspiration and the statues in the Art Gallery were to be our Muses. 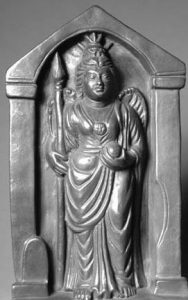 We went to the room housing the sculptures of Athena, Artemis et al.  After wandering round the gallery, taking in the beauty and majesty of the goddesses. We set to work sketching them, first drawing with a continuous line and then turning our sketch pads over so that we could not see what we were doing. The end results were interesting but as I mentioned before the objective of the activity was to make a personal connection with the goddess rather than a perfect likeness.

After a short stop for lunch and a chat about our own personal observations we moved on to the Museum to explore the Egyptian goddesses Sekhmet, Bast and Isis. We each gave a small offering for Isis as an homage and sign of respect and in the hope that a special personal petition would be heard and answered

Our final stop was the statue of Bast and we sketched and etched again, our completed work was left as an offering before being collected up. All our sketches are to be put on show at Earth Moves end of year Dream Of Green celebration to be held later in the year. 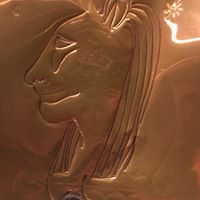 At this point it was hard to believe that the workshop had ended and we all agreed that it had been a most enjoyable, informative and deeply spiritual time.