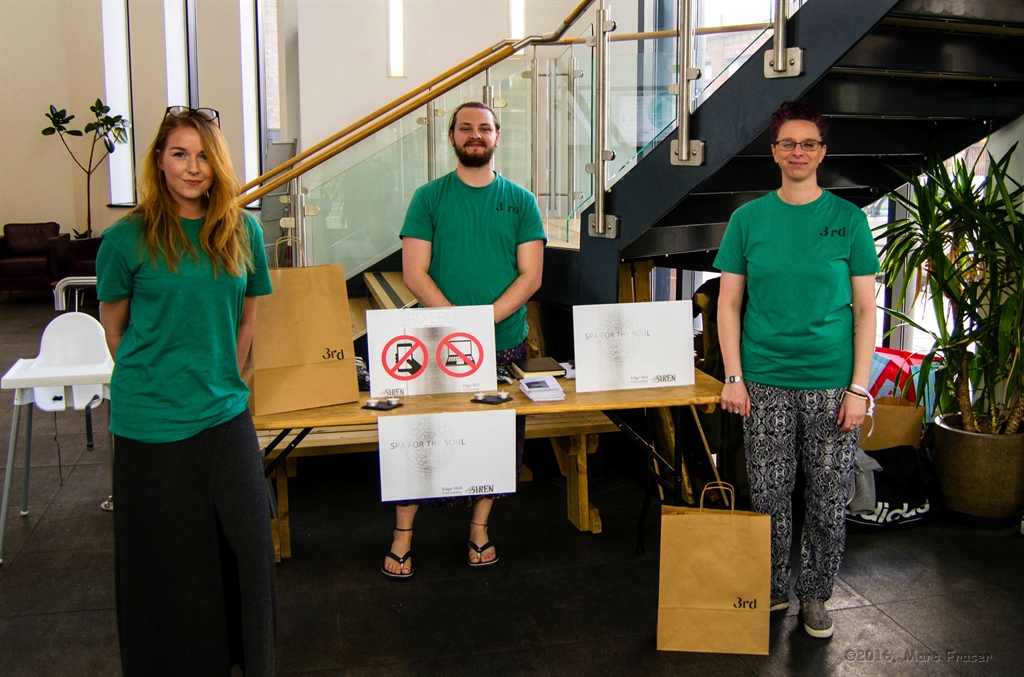 I had a very pleasant, entertaining and therapeutic couple of hours with ‘3rd Self’ yesterday at the Siren Café in St James’ Street, Liverpool. 3rd Self refers to the ‘self’ we portray on social media – the aim of the activities is to make us think about the impact of social media and wider technology on our lives and personalities. In their own words:

“We are a newly established company working towards creating accessible immersive theatre. Immersive, in terms of theatre this term is now attached to “diverse events that assimilate a variety of art forms that seek to exploit all that is essential in performance, placing the audience at the heart of the work.” (2013:22) This is something that has become crucial with our work, is the full immersion of the audience and placing them at the heart of the work. What is interesting is within most immersive works you have just as much or more control than the performers, able to change the scenario or the piece with one word or action. There is a power struggle between performers and participant. “In a relatively secular society perhaps theatre can provide that place where people come together, explore their differences and putting differences and creativity together, invent something new.” (2013:23) ”

“The third self aims to make you look up from the screen. Take in the change of seasons, notice the feel of the wind and rain and open your eyes to the natural beauty of the world… You have to be open minded, open up to the idea of writing someone a letter, watching the sunset without a 500 pound piece of technology blocking your view… “

More is explained in the interview. The show consisted of three half our ‘slots’ of one-to-one immersive theatre. I was lucky to grab a few moments with members of the group afterwards and have a chat about the project. The environment was quite noisy, although, thankfully – you will only hear the building works machinery kick off at the end of this interview to hoots of laughter from all of us. The three sections of the show were:

Talkative – in which there was a ‘getting to know ou’ session of chat and questions done as a ‘first date’ scenario.

Soul Re-Search – which was set in a tent (my aging limbs and joints struggled a bit getting in and out of it, but it was worth it!), was in two parts. First there was an iPod track with new age music and guided meditation leading back through the layers of second and third self (which are explained in the interview) to the ‘original’ self – the self unmarked by pretense, outfit, masks etc. Then there was an interesting activity called ‘black-out poetry’. I won’t go into too much detail on that as I hope to do a separate article on that one. Suffice it to say it’s a simple of idea which can generate some very interesting and stimulating results.

Nature – a guided visualization meditation taking the participant back to nature. At one point I was blindfolded – as social media is so dependant on that sense. It was interesting to see how soon I picked up on sound detail and smell.

So here is the interview – some very interesting insights:

I really hope we will see more of this energetic, inspirational group. The afternoon did my emotional well-being a power of good!

Samantha Airey: Samantha is just about to graduate with a BA Honors in Design. Her quirky style is up and coming with the current trends of  performance. Sam was part of an exchange programme, and spent a semester in Finland. She took what she learned and developed into an exciting practitioner, willing and wanting to push the boundaries of modern theatre design.

Rachael Mutch: Rachael is just about to graduate with a BA Honors in Visual Theatre and has shown exceptional talent in combining technology  and theatre towards the creation of astonishing performances, both in and out of the university setting. She has joined three other Edge Hill  University students to create ‘third self’ exploring the impact of technology on the modern public.

Reece Norris: Reece, like Rachael is just about to graduate with a-BA Honors in Visual Theatre and has proved to have exceptional promise as a  practitioner in social circus. His increased versatility within the performing arts, means he has no limit of talent, ranging from performing to design,  and like Rachael has a great insight into the use of technology within theatre.

Ellen Crimlisz: Ellen is just about to graduate with a BA Honors in Visual Theatre. Ellen has proved a versatility with the capability to adapt to most  areas of performance. Ellen brings energy to any group she works with and her quirky style and the risk she takes, makes her a practitioner to  look out for!